The Illusionist is LIVE 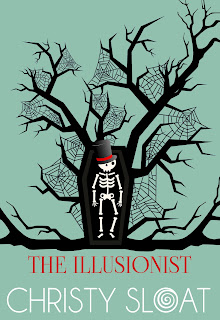 🎃 New Release! An exciting short story from Christy Sloat! The Illusionist is here, just in time for fall and Halloween!

Come inside. Come see my show. I am the igniter of flames and deliverer of souls. I will play your mind and win its bet and show you how the illusions are met. Are you an illusion? One will find out, the other will stay and live in their doubt. I am Holden Dexter, The Illusionist.
It was meant to be a fun night at the circus for Keelie and her friends. They were graduating soon and this was part of their yearly tradition. Never in her wildest mind did Keelie think that the Illusionist tent at the edge of the woods was anything to fear. After all, the circus was supposed to be fun, right?

By the end of the circus show, the girls were exhausted from laughter and the boys were ready to move on. Carver’s mood had gotten a little brighter, but not enough to improve the night’s now ruined plans. Keelie wanted to see the illusionist badly but the others wanted to check out the new Fat Lady show.
“Fine,” she said finally. “I’ll go check his show out and you go see the fat lady.” She left them all and walked off. She wasn’t mad at them, but she was a little disappointed. Especially with Graham, he knew how much she loved that sort of stuff. Sitting and making fun of an overweight lady wasn’t fun to her.
“Hey Keelie, wait up,” Carver called to her. “I want to go see the magician with you.”
“Really?” She was happy he was coming and all, but he didn’t seem like the type to like a show like this. Especially after what he was going through.
“Yeah, why not.” He smiled.
They walked across the grounds and looked for the tent. They finally spotted it in the far corner and made their way to it. Once they got close enough they noticed it was surrounded by an odd fog, that only lurked around the tent. Keelie got goose bumps across her arms and Carver pulled his coat tighter. It wasn’t that cold outside but for some reason they both felt a chill. No one stood outside to accept tickets nor was there anyone waiting for the show. They were the only two people there.
“Maybe we missed it,” Keelie suggested.
“It says the show starts in ten minutes. Maybe we are just early, that’s all.”
Keelie shrugged and got closer to the entrance hoping to sneak a peek inside. But as she got closer she noticed a sign in front: “What is the real illusion? Come inside to find the answer.”
It was alluring that was sure, but by the looks of the tent it screamed darkness. Sure, she had seen the people on T.V. who did daring acts that would scare her. But this wasn’t a freak show, it was a family circus in the suburbs. This only made Keelie want a look inside even more. She got closer and closer to the opening. Her breath catching in her throat as she touched the velvet rope holding the curtains closed.
“Stop!” Carver shouted.
She turned to a frightened Carver, and retorted “I only want to peek inside Carver, calm down.”
When she turned back around a woman stood in front of her holding a burning cigarette in her hands ever so delicately. She looked like she had come from another time and place. Her hair was glossy black and pulled up on the sides by clips with black roses on them.
“Oh, sorry, nice costume,” Keelie said nervously.
“It is not a costume. Boy, aren’t you pretty! What are you doing here?” the woman asked as she took a drag of the cigarette.
“I came for the show,” Keelie answered with a laugh. What else would she be doing here?
“And you, boy, you came for the show too?” she asked Carver. He nodded and his mouth fell open when the woman smiled and winked at him. She was beautiful, in a gothic sort of way. Keelie eyed her suspiciously. There was something strange about her for sure. And maybe a little familiar, too.
“Once you enter, there is no going back the way you once came. I need to make that clear,” the woman said as smoke came out of her mouth.
Keelie laughed nervously. Was this was a trick to scare them? She wasn’t some little kid entering a haunted hayride. She knew there was an exit, just like there are ways out everywhere. It was dark and eerie outside. She hoped this was just part of the act. It wasn’t what she was expecting, that was for sure.
“Do you understand?” the woman asked again.
They both nodded and the velvet rope fell to the ground while the curtain opened. Keelie strolled in with Carver right behind her. Once she saw the stage in front of her, she was shocked. The inside was almost as big as the circus show tent. The stage in front of her was lit dimly by a small light in the center.
The gothic woman circled them a few times, looking them over. Carver stood tall while Keelie shrunk in her nervousness. There was something about this whole place that didn’t feel right. The air was thick and heavy, and the feeling wasn’t welcoming at all. But still, she remained here. She didn’t want to leave, her curiosity winning.
“You know, maybe we can come back for another show. I think we need to find our friends,” Carver suggested as he grabbed Keelie’s arm.
“I believe I just told you that you must stay."
Posted by Christy Sloat at 8:53 AM 6 comments:

Get my Kindlegraph for your Kindle here...